Next to embarrassing school pictures, mug shots are pictures that you hope no one ever sees. For celebrities, we get the pleasure of seeing every drunken, high, or belligerent mistake.

Take a look at actor Nick Nolte’s 2002 arrest mugshot. It is completely  obvious that he gives zero f#%@s. 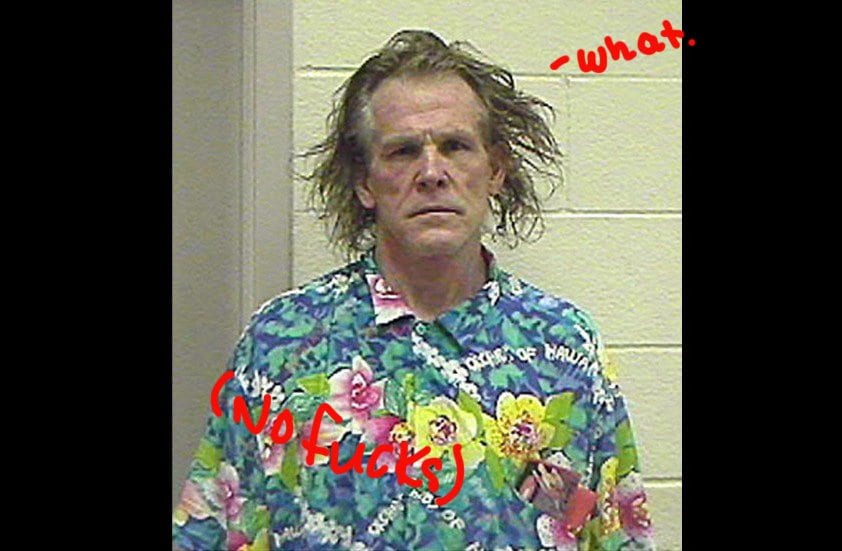 Mug shots have been around for decades. The name came from the popular slang term, mug, referring to the face.  Before social security numbers, there were no unique identifiers to tell two people apart. Mug shots were used to make sure that each arrested person could be identified from someone else.

There are three types of mug shots: the serious one, the “I messed up”, and the “I’m too high to care”. In all this time, not much has changed. Old mug shots are just has random and hilarious, but they have that old-timey look that tends to make pictures even funnier.

Many of the shots in this list include shaved photos of the male criminals. Back before prison reforms and reforms to how the first-world people bathe themselves, it was very easy to get lice and other critters in your hair. The hair on men were shaved to prevent spread of lice. Women, however, were not required to do the same thing.

This shaved mugshot below recently sent the Internet into a frenzy. He soon developed a small fan base of women who thought he was handsome.

Often, the stories behind the arrests are better than the pictures themselves. The stories are what make you stop and say – “How could that innocent face commit a crime?”

Esther Eggers – what a name! To be honest, her name sounds more like a super-villain out of a comic book or a Marvel movie. Even though people never smiled in pictures back then, Esther is smiling. She either does not care about getting arrested, or she is laughing at awesome her name sounds.

Esther Eggers was 22 years old in 1919. Her face may look innocent, but she is a certified badass. When she set to be arrested for inflicting the crime of “malicious damage”, she attacked the police officer. Even some hardened criminals won’t do that. Not only did she attack him, but she caused the police officer “grievous bodily harm”. For her crime, she received this classic mugshot and a twelve month sentence in a Women’s Reformatory. “Malicious damage” is property damage that was committed with malice or vindictive intent.

Like Jake from State Farm, Mr. Vohland here is in the midst of a case of mistaken identity…or so he claims. With that haircut, it would be hard to mistake him in a police lineup.

Years before Thelma & Louise, Ruby Fox and Myrtle Hetrick were out to seek a glorious getaway. These two women took to the road to get out of a bad situation. They were probably not driving a cool convertible, though.

These two gals got into some serious trouble in the early 1900s. Both were already incarcerated. Fox (pictured above) was in for breaking and entering, and Hetrick (pictured below) for vagrancy. They were serving their time at the State Reformatory for Women in Nebraska. After getting sick of the treatment, they escaped with the help of a unknown man. Once they were caught, they refused to go back to the same prison. In an act for better civil liberties, they requested to serve their one-year escape sentence in another facility. They were granted the request. 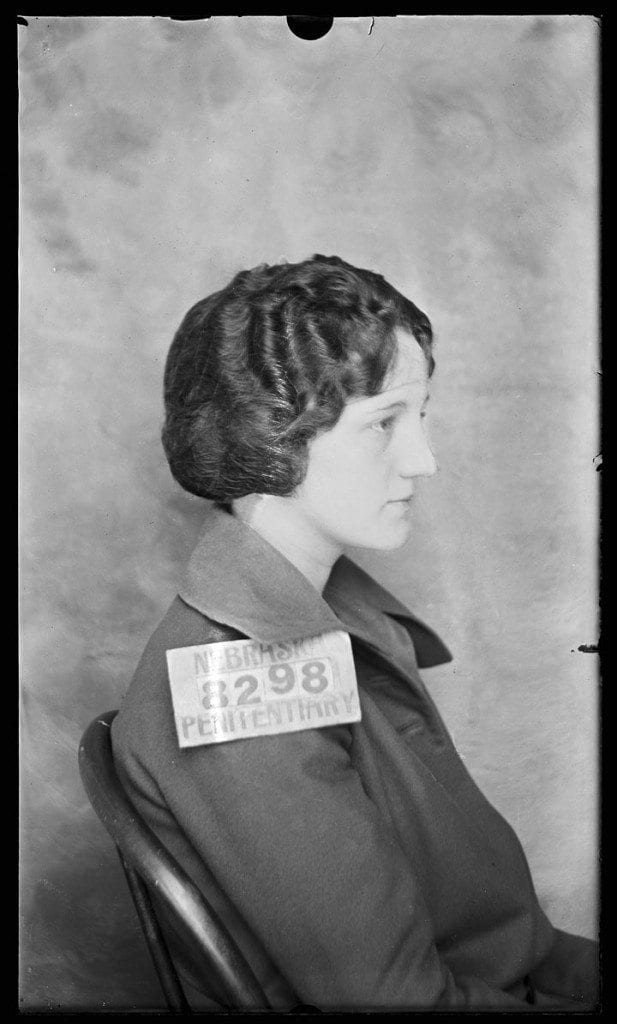 Their arrest story sounds like an T.V. show. Neil went by the street name, “Gaffney the Gunman”. In 1928 Australia,  the police performed a raid on a local house. They arrested 15 people. Some people were actually charged with “living in a house with reputed thieves”. It gives the phrase, “guilty by association” a whole new meaning.

While in the courtroom, the prosecutor claim that the police were outnumbered by a large group of dangerous felons. The defense packed the courtroom with friends and known criminals. They openly mocked the prosecution. It wasn’t enough, however. The men pictured above were convicted.

Ol’ Blue Eyes wasn’t always the smooth talking crooner. Even during his career, he had infamous bouts with the mafia. They even kidnapped his son. In 1938, however, Sinatra was just a young man who fell in love. He was arrested for “carrying on with a married woman”. That was actually a crime back in the day. By the look on Sinatra’s face, it seems like it was worth it.

The bond between mother and son is very strong. If you add murder, grave digging, and lying to the police into the mix, then that bond is solidified.

This mother and son duo, tried to pull off the perfect crime. Nannie was a maid for an Eli Feasel. She told Eli’s brother that he went to another state to see his son. After finding no trace of him, Eli’s brother became suspicious. The mother and son team were arrested, but later released without being formally prosecuted. A year later, a recently opened grave was discovered. Remains of Eli were discovered by a man who was working on the farm. After evidence was found that Nannie and Charles removed the remains, they were convicted of their crimes.

Not all mugshots were created equal. Most  mugshots are taken in front of a concrete wall. They zoom in tight on your face without taking in the scenery. This is not the situation for Alfred Hitch.

This criminal mastermind’s picture looks more like a catalog shoot than a mugshot. In 1924, Hitch was arrested for stealing a car. His greatest hits album includes being an ill-reputable drunk, hanging out in brothels, and being very familiar with the local prostitutes. He was also accused of being the leader of local Australian gang.

Sidney Kelly from Sydney, Australia. It has a nice ring to it. Between his name and his fashion sense, the man doesn’t need a cool nickname like “Babyface Nelson”.

He make look bashful in his photos, but Sidney is far from it. He was notorious for “dressing well”. How dare he! Of course he was also associated with the underbelly of Sydney and was frequently in the company of prostitutes. He was arrested for assault, gun charges, drugs trading, and for starting an illegal baccarat circuit.

This is a true criminal genius. Outsmarting the cops for as long as this woman did is no small feat.

Bertha played up her feminine edge. She would go up to a man a considerable wealth. She would feign frailty and faint into his arms. During the interaction, she was able to expertly pickpocket them of their valuables. She went by many aliases and alluded the police in several counties. She was eventually arrested in Nebraska and sentenced.

This next fellow is an international criminal. You would think that you could trust a man wearing a bow tie and a fancy hat.

He was brought into the police station for allegedly stabbing someone who refused to “pay up”. Presumably Mammone was a bookie who want to make sure that his clients knew they had to pay. It was discovered that he was convicted of manslaughter in New York City for a similar offense. He was never charged for the murder.

Mick Jagger is a living rock legend who truly lived the rock n’ roll lifestyle. He and his band mates ripped through the London rock scene during the 1960s, but that was not all they did.

In 1967, the Rolling Stones were just starting to hit it big. They were apart of the new drug scene in London. Authorities, getting sick of the intense and blatant drug use, raided a party thrown by Keith Richards. Mick Jagger was later arrested on drug charges and sent to prison. At one point, three members of the Rolling Stones sat in jail on drug charges (Richards, Jagger, and Brian Jones).

Mary Shannon was arrested, booked, and sent to jail. Let’s get one thing clear, that is one fabulous wig.

Not much is known about Shannon. What is known is that she was tried for criminal mayhem. Criminal mayhem not only sounds menacing – it actually is. It was crime that meant you went around disfiguring or dismembering people with a wanton disregard. Now, it is referred to aggravated assault or assault with a deadly weapon. By the look on Shannon’s face, I don’t think she cared one bit.

Look how suave this next criminal is. The only thing that would make this mugshot cooler is a glass full of whiskey or scotch.

He could pass as a regular James Bond, but without the cool car and license to kill. Instead, he has a mugshot and license to be a dock worker. He allegedly hung out with disreputable types and was a frequent trader of opium.

The Prohibition was successful for one group of people: criminals. Criminals took full advantage of the new changes.

The Temperance Movement was successful in the United States. Criminals like Al Capone were able to take full advantage and make a killing on illegal alcohol. In other parts of the world, Temperance Movements had varying degrees of success. In Australia for instance, there was increased regulations which made it difficult to get alcohol legally. People Alice Clarke (pictured below) took full advantage. Unfortunately, she was picked up for selling alcohol only a few weeks after the regulations were enacted.

These mugshots will have you thinking of “Brooks” from The Shawshank Redemption, although hopefully not as depressing.

Unfortunately, some people never manage to get out of the prison system. If you’ve been in there long enough, the real world seems foreign. It is hard to catch up with the time you lost. These progression of photos shows Amos Holloman throughout the years he spent in prison.

Jane Fonda, aka “Hanoi Jane”, makes the list with a very memorable mugshot. Before Jane Fonda hit it big with her fitness tapes in the 1980s, she was a bit of a rebel.

Fonda was big into the Civil Rights and Women’s Rights movements in the 1960s and 1970s. In 1970, she went on a tour speaking with college students about the war in the Vietnam. According to her own website, she claims that she was arrested on suspicion of drug smuggling. Turns out, the pills were only vitamins and the charges were dropped.

This might be one of the craziest stories on the list. It involves Elvis Presley, Graceland, and a whole lot of champagne.

Jerry Lee Lewis is mostly known for his song, “Great Balls of Fire” and for marrying his 13-year-old cousin in 1957. He is also known for allegedly trying to kill Elvis Presley in 1976. He was invited to Graceland by the King himself. He ventured over to house at 3am after a night of heavy drinking. He was carrying a loaded gun. After smashing into the front gate and behaving erratically, Presley insisted he be arrested. Lewis was arrested but maintained that he never meant to kill him.

The talk show host Larry King has been a staple on American television for years, but he  once lived a double life as an alleged crook.

Larry King was arrested on suspicion of grand larceny on December 20, 1971. Apparently, he was struggling to keep up with his extravagant lifestyle at the time. He wrote a bad check and passed it off. It eventually caught up with him. He was also charged with owing money to a financial adviser, but those charges were dropped. King plead no contest to one count of a writing a bad check.