Laws are the basic building blocks of civilization as we know it. Most American laws are based on fundamental beliefs and common sense. Yet, some seem plain stupid and many are utterly mind-boggling. We made a list of the strangest, funniest, most ridiculous local and state-level laws that are still in effect today. These are 100% legitimate, though almost none have been enforced this century.

Each law on our list is too dumb and/or crazy to offend anyone. But, while most of them just ban things no one would possibly do anyway, others echo dark chapters of American history. From separation of Church and State, to gender equality – they demonstrate how far society has come in the past few decades. Half a century ago, U.S. legislators passed bills that sound like bad parodies of ridiculous stereotypes.

Did you know that ‘dwarf-throwing’ was legal in Florida until 1989? In Memphis, Tennessee, women are still technically not allowed to drive, unless a man walks in front of the car while waving a red flag. It’s a misdemeanor to wear a fake mustache to church in Alabama if it “causes laughter.”
The point is – even if someone did enforce these laws, you could still legally laugh at them.

Follow along with the slide show for 25 of the most ridiculous laws that are still in effect today.

#25 Gainesville, Georgia – Eating Fried Chicken With a Fork is Illegal

In 1961, the Gainesville city council passed a bill declaring that anyone caught forking chicken will be detained and fined. According to official statements, deep-fried chicken is “a culinary delicacy sacred to this municipality, this county, this state, the Southland, and this republic.”

In 2009, 91-year-old Ginie Dietrick was almost arrested for cutting into the “sacred delicacy” with a knife. Turns out, this law is still ‘enforced’ as a publicity stunt. The officer told Ginie she has to master proper technique for consuming Gainesville chicken, “down to and including the post-ingestion licking of fingers.”

#24 Nevada – Camel Hunting is Against The Law

After World War I, the U.S. used a Nevada army base to train camels for the military. At some point, about a dozen escaped and ended up on private property. Local farmers woke up to see a couple of war-camel in their front yard and declared open season. So, authorities created a law to protect camels in the 1920’s and haven’t repealed it to this day.

The law isn’t enforced but there are some very real repercussions, especially for tourists. Apparently, natives of the state take it as an insult when someone says [Ar-Kanzas] instead of [Ar-Ken-Saw]. In 2009, the state secretary released a public statement explaining that correct pronunciation is vital to preserving the history of this region. According to him, Native Americans named Arkansas long before Pilgrims got there.

It’s against the law to drive a vehicle while an un-caged bear is inside. The real crime is that there seems to be no backstory to this priceless piece of legislation. So many questions are left unanswered:

My theory is, the people of Missouri took a stance against gun control, willing to be mauled by a bear to protect their Second Amendment rights.

Conservative lawmakers always insist on interpreting the Constitution in the most literal way possible, right? And, of course, they’ve always firmly stood by their  right to “bear arms.” So, quoting the 2nd amendment, they claimed everyone should be allowed to have a bear. The protest backfired when a “bear’s arms” caused unnecessary deaths and restrictions had to be put into place.

(Is that so much more far-fetched then multiple Missourians being stupid enough to get on the road with a 1,500-pound territorial predator for a passenger?)

Believe it or not, California still holds an annual frog-jumping “championship.” The ‘Calaveras County Fair and Frog Jumping Jubilee’  has been a state-wide tradition for over eight decades. Each year, bull-frog “jockeys” compete to see who’s frog can jump farther then the rest. As if this wasn’t barbaric enough, until the 1950’s law was put in place, spectators would rush in and steal the bodies of ‘contestants’ who met their doom to eat them.

#20 Idaho – Cannibalism Is Illegal (Most of The Time)

In 1990, Idaho became the first and only state to put cannibalism laws on the books. After a troubling case made it to the highest state-level court, the judge decided on a “standard” cannibalism sentence. Eating another person’s flesh without killing them, will land Idaho residents in prison for 14 years. But, if it’s the only means of survival, eating each other is a-okay.

#19 Alaska – If You Get Drunk At a Bar, You Must Vacate The Premises

If you’re drunk at a bar in Alaska – you don’t have to go home, but you can’t stay there. Actually, you can’t “knowingly enter” or stay on premises where alcohol is stocked. So, if you have a lot of booze at home, you can’t go there either.

This one is fairly recent – it has been actively enforced since 2014. The goal was to reduce alcoholism and violent crime, which are both rampant in the cold state. Alaska used to have the highest sexual assault rate per capital in the U.S. Over the past year, all violent crime has dropped almost 20%.

Banning drunks from bars may have helped, but the progress might actually be a result of a whole different law.

Is that really something state government should be concerned with? Unless there’s a way to dig tunnels with margarine, this law was put in place solely to improve criminals’ diets. Meanwhile, more then half of all public schools nationwide don’t serve real butter with school lunches.

#17 Minnesota – Trying to Catch a Greasy Pig is Illegal

Any game or contest that involves catching an oiled up pig is strictly prohibited. You have to wonder how widespread the problem was, especially after the fine was raised to $1000 in 1992. Animal rights are a worthy cause but this law seems to be more about combating human stupidity then fighting livestock abuse.

In the Great Lakes State, winners never cheat and cheaters are convicted felons. If a person is proven to be cheating on their spouse, she/he faces up to four years in state prison, in addition to a $5,000 fine. Plus, if you’re single, you’ll still go to jail for sleeping with a married man or woman.

At first, this might not seem that stupid. But Remember – it’s a state law. What happens outside of Michigan is inadmissible in court. Statistically, it ruined way more marriages then it saved. A felony trial doesn’t leave room for further trust, regardless of the verdict. 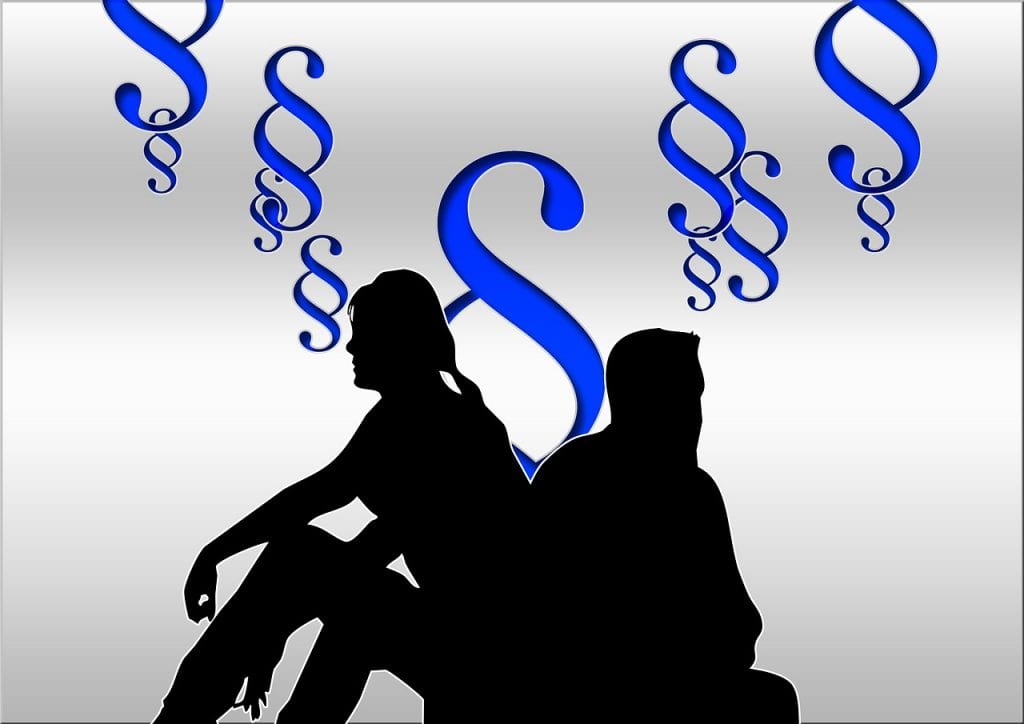 Swearing in front of a crowd is punishable with up to 30 days in prison. The Mississippi law was apparently based on ’90s sitcoms because “three’s a crowd.” As long as there are at least two people within earshot, anything you say is defined as public speech. The good news is that, instead of spending a month in jail, you deposit $100 into the state’s ‘curse jar.’

#14 New Hampshire – Possession of Seaweed is a Crime At Night

A 1973 court ruling makes seaweed equivalent to fish. And, as such, it can only be gathered during daytime hours. Anyone collecting or carrying the stuff at night is effectively marauding.

Whether you’re 16 or 60, you have to be married to have sex in Virginia. Otherwise, you would be committing a Class 4 Misdemeanor. The state’s leadership also forbids gay marriage, saying they define it as “a pact between a man and a women.” This means that, technically, only straight couples are effected by this law.

#12 West Virginia – Ferrets Can Not Be Used For Hunting

Don’t worry, it’s still okay to use assault rifles, stun grenades and military-level sniper rifles when hunting rabbit in West Virginia. As long as you don’t “take, injure, kill or pursue prey” using a ferret, you’re in the clear. Those who cheat by supplementing world-class firearms with adorable furry creatures will face a minimum of 10 days in jail and a fine of $100-500.

Federal law clearly states that no state or local authority can require candidates to pass a “religious test.” Lawmakers from these seven states basically say that acknowledging a higher power isn’t a test. At the same time, they don’t mind being supported by atheists (who can vote).

Since atheists don’t represent any religion, southern state officials claim they aren’t “covered” by freedom of religion – a fundamental human right. They base all of these claims on the traditional oath recited by mayors, governors and senators when they take office. In reality, everyone knows that holding a bible and “swearing to uphold” responsibilities is a symbolic gesture.

#10 Utah – Animal Prostitution is Not Allowed

Having sex with animals is strictly forbidden; but only if  you paid for it. I know “love knows no bounds” and all but this law is just creepy. Even the people who legalized incest in Utah probably raised an eyebrow at this one.

#9 Utah – Incest is Legal, As Long As You’re Too Old To Have Kids

If two first cousins want to get married, they’ll need to wait until they’re 65. Utahans clearly view incest as immoral, illegal and plain wrong…unless there’s absolutely no chance of a pregnancy.

In the town of Quitman, letting chickens roam free in traffic is a misdemeanor. And, sure, it makes sense to have this law in a rural farm town. But why not include all livestock? Clearly, they just wanted to revive the oldest cliche joke in the book. Now, it’s every bit as hilarious as the original (which wasn’t even close to funny).

Why did the chicken cross the road? ‘Cause she’s a criminal.

#7 Ohio – Only Police Officers Are Allowed to Bite Dogs

It’s okay – cops aren’t allowed to bite any canine they want. An officer can do so if the dog is angry or otherwise unstable and only if they think it’ll calm him/her down.

For a state that’s so against gun control legislation, Alabama sure has a strong slingshot policy. No one can make, carry or use anything even remotely similar to a slingshot. The law reads “no person shall use, for the purpose of amusement or otherwise, any Alabama slingshot or any similar thing in the urban service district.”

The lone-star state is the only place in America to pass a bill specifying that selling eye balls are illegal. Cornea transplant surgery hasn’t been around for long but that’s not why Texans sell their eyes. In 2009, a man was arrested for eating both of his eyes. He explained that it’s a delicacy in Texas and a 2010 investigation confirmed the claim.

#4 Arizona – Cacti Are People Too

The maximum prison sentence for cutting down a cactus that grows within Arizona’s borders is 25 years – same as the punishment for murder. Protecting the environment is great but it’s probably not quite as important as protecting human lives. And cacti aren’t exactly endangered species in Arizona.

#3 Arizona – You Must Get a Permit to Own Multiple Dildoes

#2 Maryland – Kissing For Over 60 Seconds is Forbidden

This kind of legislation exists in multiple red states. In Nevada, a man with a mustache can’t kiss a woman, even if they’re married. In Texas, even flirting is illegal. And, by flirting, they mean anything from a wink to a lap-dance.

#1 Washington – It’s Against The Law to Harass Bigfoot

No human is allowed to bother a Sasquatch in Washington. The state is also a safe zone for any other “undiscovered species.” So, if you find the hide-and-seek world champion – be nice or you’ll be a convict.