Police arrested a woman suspected of birthing her child inside the restroom of a Los Angeles Subway before abandoning it in the toilet.

The woman identified as Mary Grace Trinidad, 38, was held on suspicion of attempted murder.

A customer at the West Covina location noticed a bleeding woman walking out of the bathroom on Monday at about 8:30 a.m. and notified an employee. The two then approached the restroom together.

West Covina Police Department Cpl. Rudy Lopez told KTLA-5 that the two found an umbilical cord leading into the toilet. Inside, they found a baby upright and half submerged in water.

“The baby’s crying, so that’s a good thing,” said the emergency dispatcher.

The dispatcher instructed them to remove the baby from the toilet and wrap him in towels. A placenta was found in the trashcan. 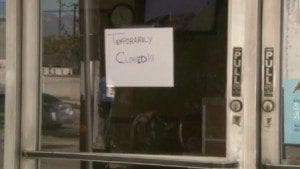 Lopez described the scene as “quite bloody.”

The baby was taken to the Queen of the Valley Hospital in critical condition.

Police followed a trail of blood to the back alley of a Pep Boys, where they discovered Trinidad, according to Lt. Dennis Patton.

The suspect was taken into custody about 20 minutes after the baby was discovered.  Trinidad was booked on suspicion of attempted murder and child endangerment. She was wanted on a warrant for drug-related offenses.

Trinidad is a transient woman of Filipino descent. Subway employees declined to speak to reporters, but workers at nearby restaurants said they often saw her asking for food.

“I see her all the time. She talks to herself,” local resident Sammy Valdez told KTLA.

In California, citizens can surrender newborn babies to authorities within 72 hours after their births without repercussions. In Los Angeles County, infants can be turned over to fire stations and hospitals.

As of Tuesday, the baby returned to good condition.