ISIS has released a video threatening the founders of Facebook and Twitter, according to a report by Vocativ.

The news site reports it uncovered the video titled “Flames of the Supporters” on the social media site Telegraph, which is frequented by ISIS supporters. The video by “Sons of the Caliphate Army” targets the two companies for their revamped efforts in deleting terror-related accounts.

The 25-minute video features a picture of Facebook Founder Mark Zuckerberg and Twitter founder Jack Dorsey with bullet holes across their faces. In it, the group claims to show how they’ve hacked Facebook and Twitter accounts by changing profile pictures and posting ISIS propaganda. 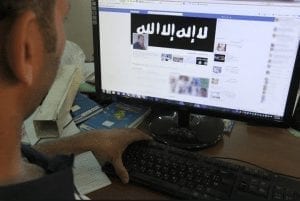 The video ends with the following message to Zuckerberg and Dorsey.

“You announce daily that you suspend many of our accounts, and to you we say: Is that all you can do? You are not in our league. If you close one account we will take 10 in return and soon your names will be erased after we delete your sites, Allah willing, and will know that we say is true.”

Earlier this month, Twitter said it had terminated more than 125,000 accounts for “threatening or promoting terrorist acts, primarily related to ISIS.” It also announced it had hired more staff to monitor terror-related activity, and that it was suspending accounts faster than ISIS could recruit.

“We work aggressively to ensure that we do not have terrorists or terror groups using the site, and we also remove any content that praises or supports terrorism,” said Facebook spokesman Andrew Souvall.

Of course, this doesn’t mean ISIS supporters can’t just open new accounts. But, they would be starting from scratch and rebuilding their following.

The companies’ efforts have also forced ISIS supporters to retreat into lesser-known websites.

Nonetheless, fighting ISIS on the cyber front is no easy task. In the past, ISIS has called on “lone wolves” to attack Twitter employees and even kill Dorsey.