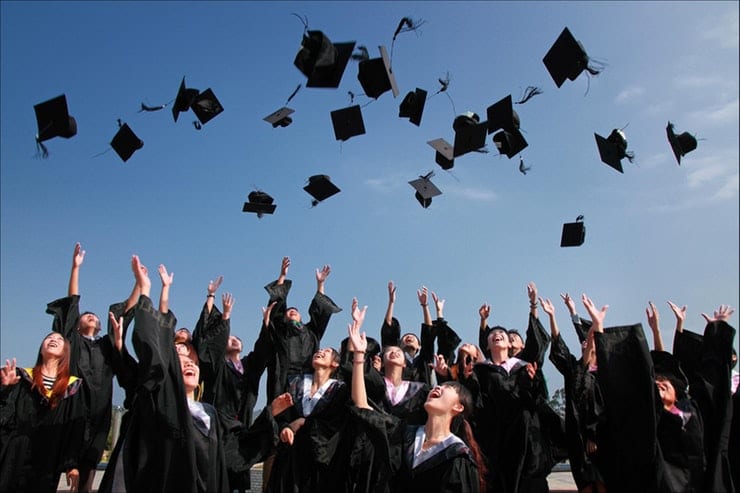 When it comes to choosing a college or university to study at, there are many factors to consider. There’s the quality of the education and whether or not the school has the programs you want to study. But for many, a large factor is the hefty price tag that many, if not most colleges and universities in the United States have.

In fact, recent reports have found that the yearly tuition for state colleges are an average of $9,970 for state residents, and $25,620 for everyone else. This compares to an average of $34,740 at private non-profit colleges. Further findings published in the HSBC report found that parents are paying on average, $44,221 on their child’s education, with many of these parents now looking for less expensive options — like studying abroad.

That’s right, it is now often less expensive to send your child to a school overseas than to keep them even in an in-state university. Many of these overseas colleges and universities even offer free tuition.

To help you make an informed decision, here is a list of places where you can study abroad for free.

If you like your ice green and your bank account the same color, you may want to study abroad in Iceland. And if that last statement puzzled you, you’re probably not alone, and should continue your educational pursuits.

All public colleges in Iceland are free for American students, except for an annual $600 registration fee, which is you know, a lot less than the alternative. And while education is free, you will still need to cover your own living expenses such as rent, utilities and food. Furthermore, if you plan on staying for longer than three months, you will need to apply for a residence permit.

Keep in mind that you will me studying in a foreign country with a language that is not English, and you will need to understand the language. There are some postgraduate programs provided in English by the University of Iceland, Reykjavík University and the University of Akureyri, but don’t bank on sailing through not having learned the native language.

In 2016, documentarian, Michael Moore made a film titled, “Where to Invade Next”, where he discussed what the United States could learn from other countries. In the part on education, he picked Finland as the exemplary country, mainly for the way that the country runs its elementary and secondary school system.

However, it isn’t just the country’s elementary and secondary schools, but also its colleges that are providing awesome learning opportunities for people. Because in Finland you don’t pay tuition of fees for colleges and universities.

Brazil. Home to the Amazon (rainforest, not online shopping) and free education!

Brazil’s public colleges, known as federal universities, offer tuition-free education to admitted students. And the universities are top tier schools, ranking high — even claiming 83 of the region’s top 400 universities, far more than any other nation.

However, not just anyone can attend one of these prestigious universities for free. There is an application process, and the chosen ones have been found to be predominantly middle-class or wealthy students. And with approximately 250,000 spots per year, according to Business Insider, the chances are slim — but still worth a try.

Would you like to study in the number 1 ranked beer drinking country in the world — for free? What college student wouldn’t?

Of course, you may want to lay off the booze whilst studying, because, well, obvious reasons.

Anyhow, the Czech Republic is mandated by law to offer free college education to citizens of all nationalities if you study in the Czech language. There are minimal fees, and if you would like to study in your native language, you will have to pay. However, if you embrace the language and stay (mostly) away from the beer, you can walk away with a degree from one of the countries 70 universities to choose from.

What’s better? Living costs are more affordable here i than in most of Western Europe, coming in at around $350-750 a month.

Higher education in Denmark is free for students from the EU/EEA and Switzerland, as required by law. If you are looking to study abroad, however, you will need to be part of the country’s foreign exchange program to reap the benefits of free college tuition.

Great Danes did not actually originate in Denmark, but in Germany — which, by the way, also offers free college tuition that may or may not be attractive to foreigners.

You be the judge.