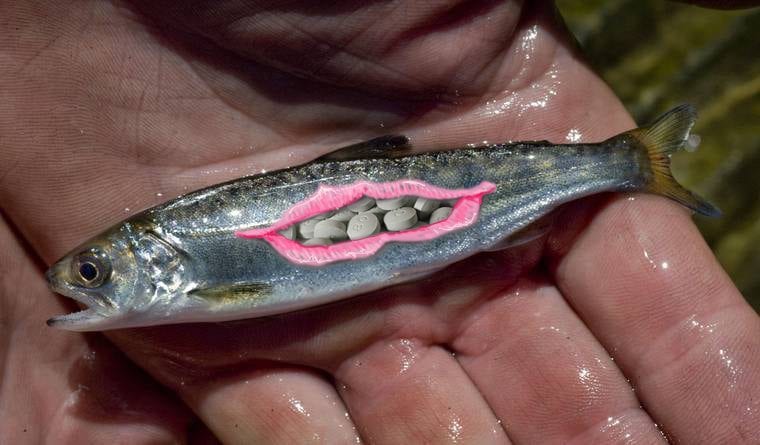 Researchers found various drugs in the tissue of juvenile chinook swimming through the Puget Sound, where wastewater flows from sewage-treatment plants. These drugs included Advil, Zoloft, OxyContin, Valium, Prozac and even cocaine.

Scientists detected a total of 81 chemicals and personal-care products, according to a study published in the Journal of Environmental Pollution.

Some were recorded at levels among the highest in the nation’s estuary waters.

Jim Meador, an environmental toxicologist and the paper’s lead author, said the results were surprising.

“The concentrations in effluent were higher than we expected,” Meador said. “We analyzed samples for 150 compounds and we had 61 percent of them detected in effluent. So we know these are going into the estuaries.”

Scientists also found these compounds in the tissue of resident staghorn sculpin.

Even fish in the Nisqually estuary, which receives no direct municipal treatment-plant discharge, tested positive for many of these chemicals.

“That was supposed to be our clean reference area,” Meador told The Seattle Times.

Researchers say these findings may be attributed to a particularly high amount of people using these chemicals in the area or wastewater-treatment plants’ general inability to remove all of these chemicals from the water.

Betsy Cooper, a permit administrator for the county’s Wastewater Treatment Division, told The Seattle Times that not all chemicals can be entirely removed from the water.

“You have treatment doing its best to remove these, chemically and biologically, but it’s not just the treatment quality, it’s also the amount that we use day to day and our assumption that it just goes away,” Cooper said. “But not everything goes away.”

Nonetheless, Meador says it is unlikely that these chemicals would affect the region’s human population because people don’t usually eat the fish tested and the levels of these chemicals detected were too low to be active in humans.

The long-term effect of these chemicals on the marine population is unknown. Researchers did not study what effect these chemicals have on sea life that consumes the contaminated fish.

“You have to wonder what it is doing to the fish,” Meador said.

Meador’s other research indicates that juvenile chinook salmon migrating through contaminated estuaries in Puget Sound die at twice the rate of their counterparts in other regions.

Several of the compounds detected were classified as “chemicals of emerging concern,” because very little is known about them. However, the drugs detected could potentially affect fish growth, behavior and reproduction.

Researchers suspect that up to 97,000 pounds of these drugs and chemicals flow into the Puget Sound each year.