Should You Even Watch Them? 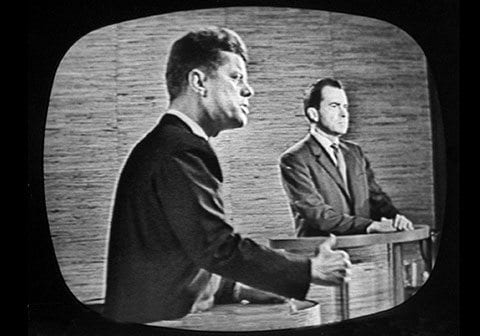 The first televised Presidential debate happened in 1960 and was between John F. Kennedy and Richard Nixon. A lot has changed since the days of black and white broadcasts, such as the way we consume debates. Those watching the first debate felt Kennedy won – while those listening on the radio felt Nixon won. Nielson data shows households with televisions tuning into debates has declined from 60% in 1960 to 38% in 2012. Which matches a downward trend of Presidential voter turnout, ranging from %62.77 in 1960 to 54.87% in 2012. So do these debates even resonate with the American populace?

Professor Douglas Yates offered up the following about debates.

Perhaps only an old college professor like myself even notices that American presidential debates are not really ‘debates,’ in the formal sense of two adversaries dialectically addressing a single point at issue. Rather they are television spectacles, where two men deliver short, improvised speeches, moderated by television journalist-hosts, and sometimes even inviting the audience to ask questions (like an afternoon talk show). In these non-debates, there are exchanges of invective, ad hominem insults, unwarranted claims, unverified facts, slogan-mongering, immaterial subject matter, anecdotal evidence, hypothetical examples, and many other logical fallacies that would be corrected in a properly regulated debate. Rarely are the two adversaries forced to follow a single line of reason to its logical conclusion. This kind of mud-slinging is hardly the right format for valid, conclusive arguments.

If Debates Are Rarely Substantive What’s Their Point? 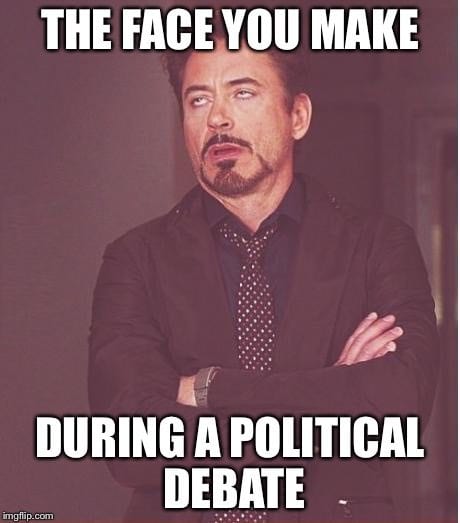 During this cycle the range of topics discussed during Democratic Debates have been broader and the candidates have offer more substantive policy answers. However, Republican

candidates have received a far more narrow scope of topics and have not been as specific. The key is that during a Primary voters are far more likely to change their support as not all candidates have the same level of name recognition.

General Elections are different as there are far fewer voter that remain undecided. That portion of the electorate is wildly important as those 3-5% Swing Voters can sway an election to either party. During a General Election, style is far more important than substance. Candidates go out of their way to appeal to voters on an emotional level rather than attempting to win them over with policy, that quite frankly – majority of voters will not have knowledge of.

Can Debates Change An Election?

Taking a look at the current election cycle on the Democratic side, online polls overwhelmingly have shown that Senator Bernie Sanders has won the debates. His impressive performance in the most recent debate in Florida has energized his base, fundraising efforts, and could propel him into having a great showing on March 15th. If he performs well it sets him up well with an election map that is in his favor going forward.

On the Republican side Donald Trump was wildly believed to have won the majority of debates until he was challenged during a debate by Senators Marco Rubio and Ted Cruz on a number of issues. His poor performance may have led to some surprising victories by Senator Cruz, yet during the most recent debate in Miami – Trump was rarely challenged by his opponents which will play heavily in his favor.

Debates in front of millions of potential viewers definitely has the potential to sway voters from one candidate or another, possibly even helping undecided voters chose which candidate they will support.

While they can be time consuming, immature, and plastered with inaccuracies debates are worth your attention if you care about the electoral process. That is if you can get past all of the noise. 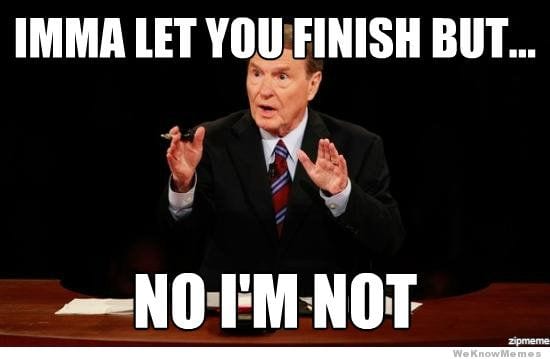